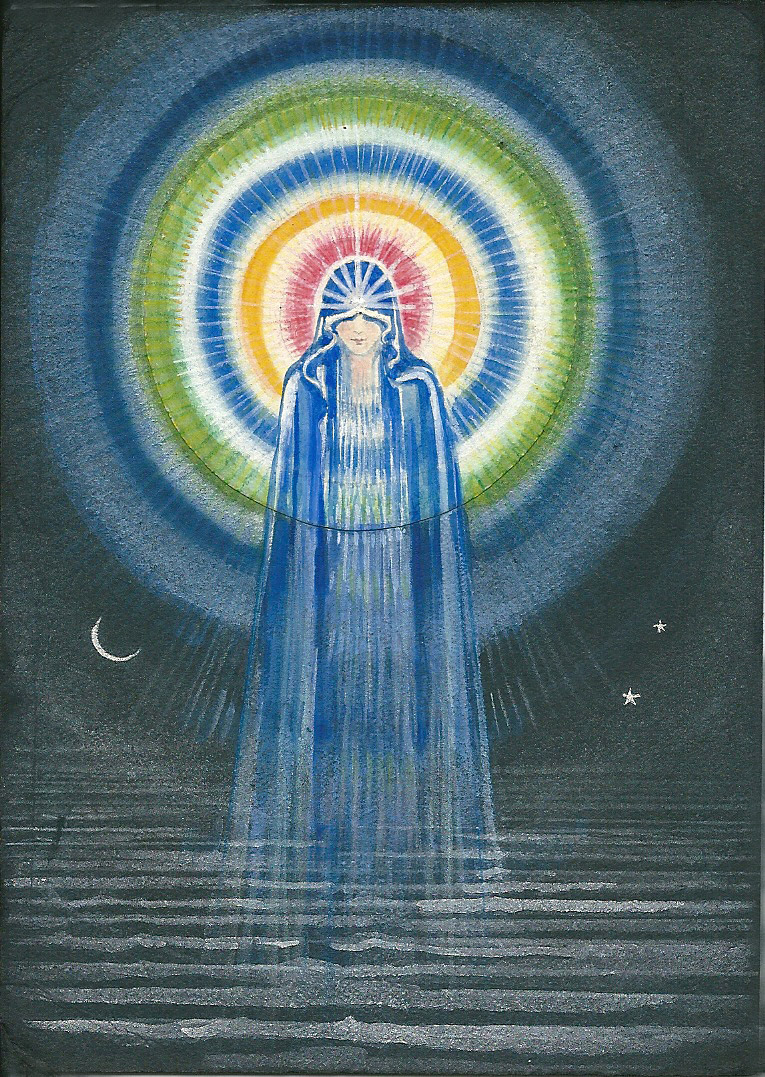 This is the story of Mary, revered in their unique ways by Christians of different traditions, members of other world religions, esotericists, and others. Topics include Mary in Scripture, Mary in the visions of stigmatic Anne Catherine Emmerich, Mary in the early church, Mary in Christian doctrine and devotion, Mary in apparitions and modern esoteric teachings, Mary as World Mother and (quite literally) Queen of the Angels, and Mary as Priestess at the foot of the Cross and in the restored Mysteries of the Aquarian Age.

The book is a love offering to all who hold Mary in high regard, feel drawn to her, want to learn more about her, or want to serve her. Read the book online, or feel free to download or print copies for personal use. Commercial use or reproduction without the author's written permission is strictly prohibited under United States and international copyright laws.

A greatly expanded second edition is in progress. Individual chapters will be posted when they approach completion. An announcement will be made when the entire Second Editioni is completed.

From the very beginning Mary was recognized as a special child, and, remembering Hannah’s promise to the angel, the parents resolved to present Mary to the temple, even at a few months old. But Joachim and Hannah were persuaded to wait until the child was three. Mary was duly presented to the temple, and there, we are told, "the priest received her, and kissed her, and blessed her, saying: The Lord has magnified thy name in all generations. In thee, on the last of the days, the Lord will manifest His redemption to the sons of Israel. And he set her down upon the third step of the altar, and the Lord God sent grace upon her; and she danced with her feet, and all the house of Israel loved her." Mary lived in the temple “as if she were a dove that dwelt there, and she received food from the hand of an angel.” [Ch. 1.]

Mary made daily visits to the sepulcher where Jesus had been laid after the Crucifixion. Both the Transitus Mariae and a related text known as the Ethiopic Six Books, attest that those visits were made at some danger to herself, since the Jews wanted to keep her away or even wanted to kill her. In the latter text, the Jews threatened Mary, complaining: “[B]ecause of the one who was born from her, the temple was destroyed.” The threat may have been real, or the story may simply be an example of anti-Semitic rhetoric typical of Christian writings of the period.
The Transitus Mariae ... reports that on one of her visits to the sepulcher: "[S]he was carrying sweet spices and fire. And while she was praying and had lifted up her eyes and gazed to heaven, suddenly the doors of heaven were opened and a scent of myrrh went up, which the Lady Mary had thrown on the censer, and its odor went about all the regions of heaven. And in that hour came Gabriel the angel to her from heaven, and knelt to worship her; and he said to her: 'Hail to thee, mother of God! thy prayer has been accepted to heaven before thy Son, our Lord Jesus Christ. And therefore thou shalt depart from this world unto life everlasting.'" [Ch. 3.]

Mary seems to have engaged in priestly activities during her ministry. Furthermore, and perhaps even more importantly, leading churchmen in later centuries affirmed that her participation in the Sacrifice of the Cross established her as a priestess for all time. For example, French priest Julien Loriot (1633–1715) declared: "Mary is a divine priestess, she is a great sacrificer who takes the place of all people and offers to God in their name the greatest and most worthy sacrifice that has ever been offered, presenting to him his unique Son, so holy, so pure, so innocent, which makes St Epiphanius call her the priestess of our religion .... Oh blessed virgin, you truly are the priestess of our religion; you have put together in one sacrifice, the most perfect sacrifice which the earth has ever offered.
Bishop Jean Nazlian, speaking at a Eucharistic congress at Lourdes: "Mary is also something greater than temples or tabernacles ... she is priest .... A priest has the power to mystically produce the body of the Lord giving that body its sacramental form .... I allow myself to say that Mary is the first to say Mass, by agreeing to the Incarnation and so preparing the victim ... Mary fulfils in advance the sacrifice of the cross by preparing what is required for it .... More than any priest she can point at her crucified Son and say: 'This is my body!' Mary is therefore not a priest who does not share in the sacrifice, but a priest who puts herself into the victim who is the heavenly bread." [Ch. 8.]

Mary has maintained surprising consistency in apparitions extending over a period of seven centuries. In multiple instances Mary appears as a young woman, in her late teens or twenties. She has dark hair—though we do not hear of the auburn, or “reddish golden,” hair of the historical Mary. Her head is usually veiled, and she wears flowing robes that fall to her feet. In a few cases her robes have been purely white, but more often she dresses in blue and white. Accessories may be of a contrasting color, like pink or yellow. On special occasions she may wear golden robes and a crown.
Witnesses to Marian apparitions frequently comment on Mary’s beauty. After the eighteenth, and last, apparition at Lourdes. Bernadette Soubirous remarked: “I have never seen her [Mary] so beautiful before ... so lovely that, when you have seen her once, you would willingly die to see her again!” The Medjugorje witnesses commented ...: “It is not our kind of beauty. It is something ethereal, something heavenly, something that we’ll only see in Paradise.” One of them asked Mary, “How is it possible that you are so beautiful?” The response was “I am beautiful because I love. If you want to be beautiful, then love.” [Ch. 8]

Upon her arrival in the deva evolution Mary found orders of angels waiting to serve her commands. She now needs human disciples to help spread her message and to make it a reality in the world of human affairs. Among the masters, Mary is perhaps in the enviable position of being able to draw upon a billion devotees around the world, as well as many others for whom devotion may not be a natural instinct, to build a network of active disciples. Those who pledge themselves to her service have a unique opportunity to serve alongside devic colleagues. Multiple esoteric teachers have predicted closer contacts between the devic and human kingdoms in the Aquarian Age. [Ch. 8]